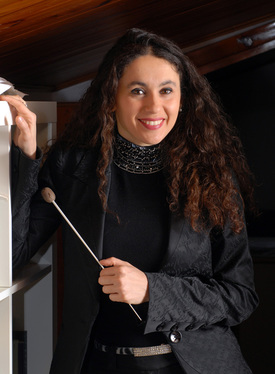 English translation by: Dino Imeri
Превод на англиски: Дино Имери
As part of the 44th edition of the May Opera Evenings, one of the most ingenious works by composer Giacomo Puccini the opera "Turandot" was performed by the Macedonian Opera and Ballet ensemble conducted by renowned conductor Maestra Gianna Fratta on 26th of May.
Gianna Fratta has finished her education in piano and composition with the highest grades, as well as orchestral conducting with Cum Laude honors studying with Daniella Carattori , Ottavio De Lillo and Rino Marrone. She continued her piano studies with Franco Scalla at Imola as well as Sergio Perticarolli in Rome, winning a prestigious award for excellence and a scholarship at the Academy Chigiana in Sienna where she had studied orchestral conducting working with Maestro Yuri Ahronovich.

"Turandot" is known as one of the most popular in the operatic literature. It's written after a libretto by Giuseppe Adami and Renato Simoni in three parts. The text is based on the drama bearing the same name by Carlo Gozzi adapted by Friedrich Schiller. Puccini died before finishing the opera which was then written by his student Franco Alfano to conclude the work.

We present to you our interview with Maestra Fratta conducted shortly after the performance.

Мilan Jankuloski: In the beginning, I would like to wish you a warm welcome in Skopje. Thank you for being with us at the Macedonian Opera and Ballet, it's an honor to collaborate with you. Maestra Fratta, we begin with Turandot: a story of love, secrets, life, hope, blood, the name, no-one sleeps in old Beijing, two hearts - one would be dead without the love of the other. What does this story tell us with its magnificent music?

Gianna Fratta:  It tells a story about love, but not just Calaf's love for Turandot, but also for Liu's great love and great hope who falls in love with Calaf just over a smile - ever since the day he smiled to her, she lived her life ready to die for him. Her love is truly great. Then, there's the love between the father and the son. Timur's love for his son Calaf is a special kind of love, he is happy to see his son. It's a wonderful story. Also, it's a story about hope, about triumph, the challenge, the dare of risking your own life for one love. So, it's a very romantic ideal, love and death intertwining, many men die for Turandot but Calaf wins. It's probably the most beautiful music ever written in history.

М.Ј.: Who is Puccini for you?
G.F.: Puccini, for me, is the greatest opera composer. I am Italian, and we have many great composers.. of course, Verdi, then.. Wagner who is not Italian but for me, Puccini is the greatest. I feel very close to him. I've conducted a lot of his music - Triptichon, La Boheme, Tosca.. a lot of music. I also consider him to be a genius in the art of orchestration, he has an incredible ability to be so elastic in the tempo, contrary to Verdi who is much stricter. Personally, I believe he's the greatest composer that ever lived.

М.Ј.: What does opera mean to you?
G.F.: For me, opera is my life because I live conducting operas. It's the greatest form of artistic performance.. the most complete. In opera you have singing, music, acting, direction, scenography, ballet, there must be good actors.. a text-libretto, therefore you have literature, poesy, history. For me, it is the highest art form because in it, you can find all of the arts. 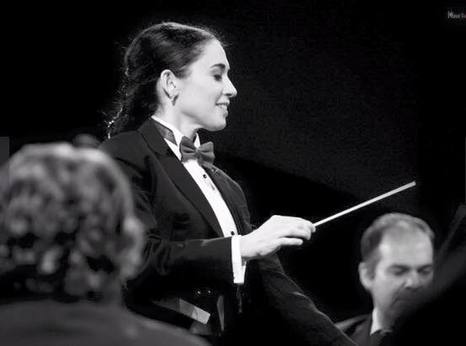 ​М.Ј.: Tell us about your studies and the beginning of your career?
G.F.: I truly studied a lot. I  began with the piano, then composition, orchestral conducting, choir music, choir conducting, then I graduated in Law school.. so I really learned a lot. I began when I was merely five years old. I was 9 years old when I first hear the orchestra and I thought I really want to be a conductor!

М.Ј.: What does it mean to you to be a conductor? .. a woman conductor!
G.F.: Yes, of course. It's a big challenge because there are not many women conductors. Everybody is used to seeing men on the podium, so every time you see a woman it's surprising and strange. I've been the first women conductor of many orchestras, like in the case of Berliner Simfoniker, Macao Symphony, the Rome Opera.. I was the first woman conductor in many big opera houses. But.. that's not good! Not many women get to the big theaters. I hope this will change in the future and there will be more and more women conductors.

М.Ј.: Do you have experience teaching conducting?
G.F.: I teach in a conservatory in Italy for several years now, but I teach composition. I teach in Italy, I hold master classes in many universities, I teach in Korea, America, Turkey.. many places.

М.Ј.: Can you tell us about your upcoming engagements?
G.F.: Next month I'll be in Seoul where we'll perform La Traviatta. Right after that, Cavalleria Rusticana in Sicily, Don Pascuale in Maribor, Rigoletto in central Italy. La Bohemes.. and several symphonic concerts in December, so I'm reserved until June 2017.

М.Ј.: Maestra Fratta, you're already a renowned international artist. What is your advice to young artists who are taking their first steps in their careers?
G.F.: I can tell them, above all - Learn. Learn a lot. Learning is the most important thing. To be prepared is very useful, then.. to have strenght to try and never give up, to keep looking for the way, the road to success. Believe in yourself, invest in yourself by studying, not by trying to find the shortest way. Take the long way, it's the only way to success.

М.Ј.: It's always a pleasure to have you here, Maestra. We wish you success with your future projects and thank you for being with us!