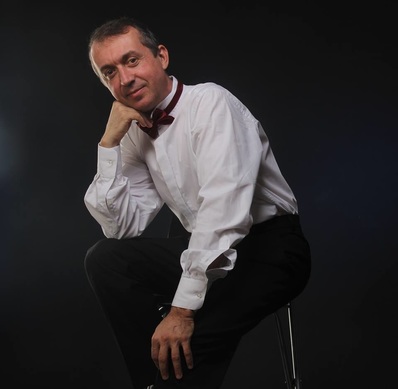 Yuri Shishkin / Јуриј Шишкин
Choose a language / Изберете јазик
ENGLISH - МАКЕДОНСКИ
He is one of the best accordionists in the world and his modesty is in fact his wisdom and his greatness. We had an immense honor to talk about music with Maestro Yuri Shishkin who managed to take some time off his extremely busy concert schedule to do this exclusive interview with us for our readers. Born in Azov, Russia, his musical journey began early on. He studied in Rostov and soon after he began a streak of brilliant victories at some of the biggest music competitions winning seven first prizes. The world became his home, he began performing at some of the most prestigious festivals receiving universal public and critical acclaim as an incredible virtuoso with deep musical sensibility performing a rich repertoire from the accordion literature, but also adaptations for his instrument. For him, music is a teacher.. an incredible and wonderful world. He shared with us some of the secrets behind his success, we sincerely hope you will enjoy reading this interview.
Dino Imeri: Maestro Shishkin, first of all I would like to thank you for finding the time to do this interview with us. At the very beginning, I would like to ask you - what is music to you? When and how did you decide to become a professional musician?
Yuri Shishkin: Music.. from today's perspective, this word sounds even religiously to me. It's something much deeper than just a way of communicating with the world and the audience. It's a way of thinking, a depth of feelings, a different and very special type of love. Music taught me a great deal, it opened many doors for me. I'm thankful to music in a way like you can be thankful to a person. Maybe that's why my development as a musician never stops, because I really feel that I touch an unusual and wonderful world. I do the same in everyday life - with respect and gentleness.
When I was a child, I didn't want to be a musician. Playing the accordion was not interesting to me at all! I was enrolled in the music school so I wouldn't waste my time on the streets. I guess my parents noticed how much I loved art because I loved drawing, watching ballet and opera on the TV, all the concerts.. I fantasized a lot. They chose the accordion because they thought that's the instrument for me. I didn't share the same opinion, until I met my teachers. It was then that I realized music is what I was created for. My teacher helped me open up my heart to music - actually, they didn't close it, as it often happens nowadays. I'm thankful to them to this day and when people ask me what's more important talent or teacher - I say teacher.
D.I.: Being a musician, you create and this is how you contribute to society. How important is the role of musicians today and why do people need music?
Y.S.: I remember hearing about an event that took place during World War Two. This story tells me more about music than any written book on the subject. It all happened near the end of the war when the fighting took place in Germany. There was a group of German soldiers fortified in a basement of a house. There was nothing that could make them come out and surrender, they were fighting fiercely. The Soviets attacked several times with no success. There was a piano on the first floor of the same house. It so happened that composer Nikolai Medtner was among the Soviet troops. At one point, when the soldiers were resting and preparing for a new attack, Medtner sat down at the piano and played the first movement of Beethoven's Moonlight sonata quietly. After a few minutes, the German soldiers came out of the basement with their hands up, surrendering. Can you imagine that sight! That's a miracle. Music is probably one of the greatest miracles in our lives, only we don't notice it.
D.I.: Indeed! Your biography is full of awards, recognitions, concerts - all of it a result of a lot of work, as well as talent. Still, can you share with us what is necessary in order to achieve success?
Y.S.: I think, three things. First - have faith in yourself. Many things can hurt one's self-confidence, most often we ourselves are the cause of the damage. Laziness, doubts.. we cannot let this stop us. Even if you doubt yourself, you've got to move forward. Second - sacrifice. Are you ready to sacrifice your sleep, food, leisure time with your friends, pleasures, hanging out with your family so you would go and practice your instrument? If the answer is Yes, then you might stand a chance. Your sacrifice speaks for your love. And thirdly - love music and do it honestly. Always appreciate love more than success, and that's when music will tell you it's secrets and you will always be on the top.
D.I.: Often, you perform very complex works originally written for other instruments. What made you expand your repertoire with such works and how difficult to perform are they?
Y.S.: Play what you love playing and the audience will believe you. And it will not be difficult. For me, it's not at all difficult to play any complex works because I'm in love with them. Think about it, it's just like life. When you are in love with someone, do you really think about being cold, or hungry, or that you have some major challenge ahead of you? The power of your love will make everything easy. It's the same with music. Don't lie to yourself or to your audience - there's no time for that! Choose your program with your heart. I perform piano literature so much, even more than orchestral music. Perhaps, I was a pianist in my previous life. 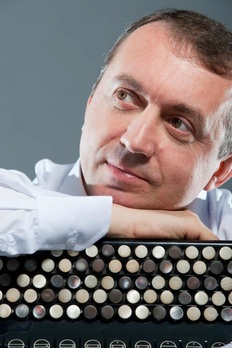 D.I.: Another interesting fact about you is that you tend to talk with the audience before playing the pieces. You tell stories about the composer, the work and your impressions. Does this help in the attempt to bring the music closer to the wider audience? What's the purpose of this interesting concept and approach?
Y.S.: Of course, it helps to better understand the music. Only, one needs to talk in the mood and spirit of the piece. I call it - speaking in the tonality of the composition, so there would be no difference between the way you talk and the way you play. It's of most importance not to forget the initial note of the composition. Also, I can enhance the dynamics of the concert by changing the intonation of the words, shortening or lengthening the text. Near the end of the program, everything should have a faster pace, so that's why I speak less. I only narrate the concerts in Russian or German. These are the languages I speak best.
D.I.: The most famous Macedonian accordion player is the young Aleksandar Kolovski. He is slowly, but surely conquering prestigious competitions and scenes. Are you familiar with his work and what do you think of his performance? Also, I would like you to share with us some advice for young musicians - what do they need to succeed in the world of classical music?
Y.S.: I know Aleksandar for a long time now. He's a wonderful musician. We meet at the big festivals in different countries. He's is incredibly easy to communicate with, and he plays with the same easiness. It looks as if nothing is difficult for him. But, he plays with soul, and that's so important and difficult! The audience loves him. They believe in him, from the first notes of a concert. He is an honest musician.
For young artists, I have several thoughts to share. I think that awards and prizes are a result, but not a goal. On first sight, that's not very obvious. All of us are trying to do something, we are striving to succeed, to be noticed, but what we don't understand is that we, ourselves don't make the success. The success is given to us from "above". It's given to us for something in return. It doesn't happen when we want it to happen, but when we are ready for it to happen. One has to do a lot, before one receives it. The slogan of Pepsi "Grab life" doesn't work here. You've got to learn how to give.
D.I.: It really is so. At the very end, do you plan concerts in Macedonia? Have you ever visited our country?
Y.S.: I haven't visited your country yet, but I would love to perform if I receive an invitation.